Well, it’s been forever since I’ve updated this site. Things have been happening, so hopefully we can get up to speed pretty quickly. 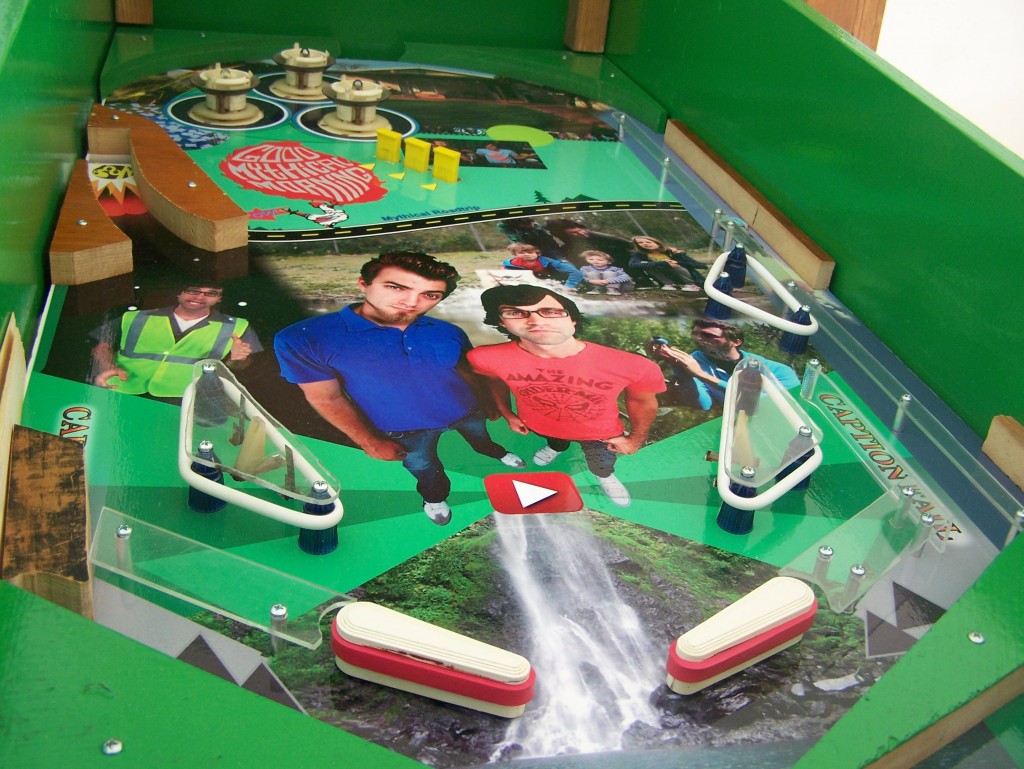 So, that’s what the playfield is currently looking like. Pretty much everything you see there works. 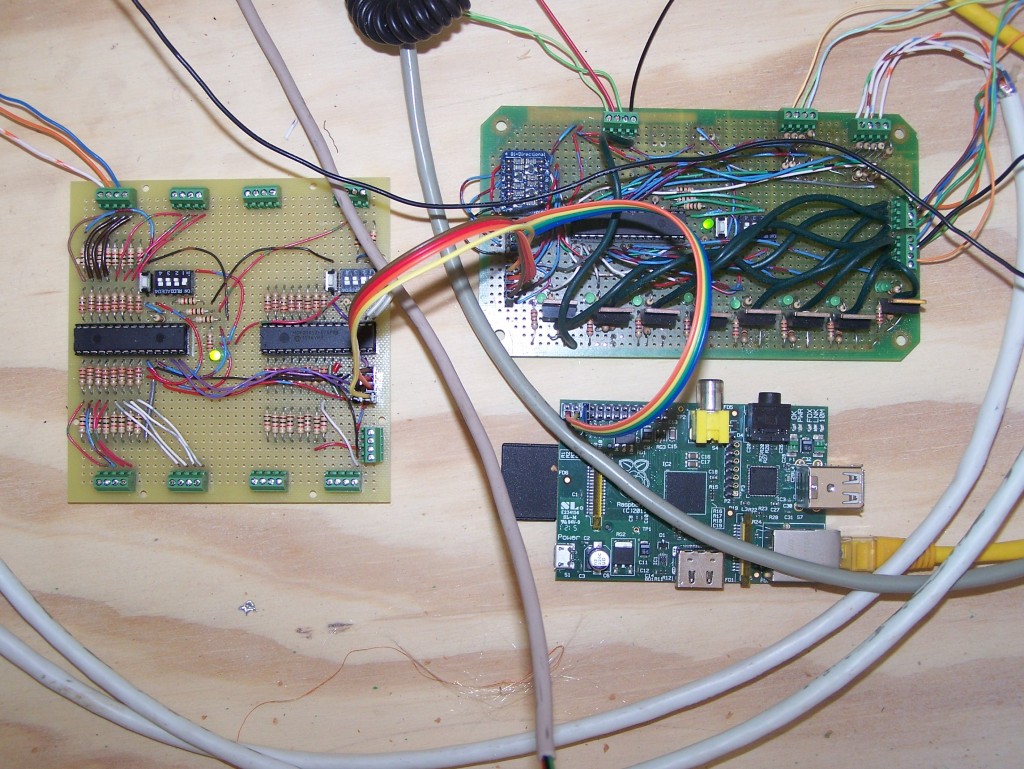 Currently, there’s three boards that make up the “brains” There’s the RaspberryPi, and two boards cortroled on an I2C buss.

The board top left is my input board. Two MCP23017 chips are used as I/O expanders on an I2c buss. Only the left chip is fully wired up at this point.

The top right board is my original control board. 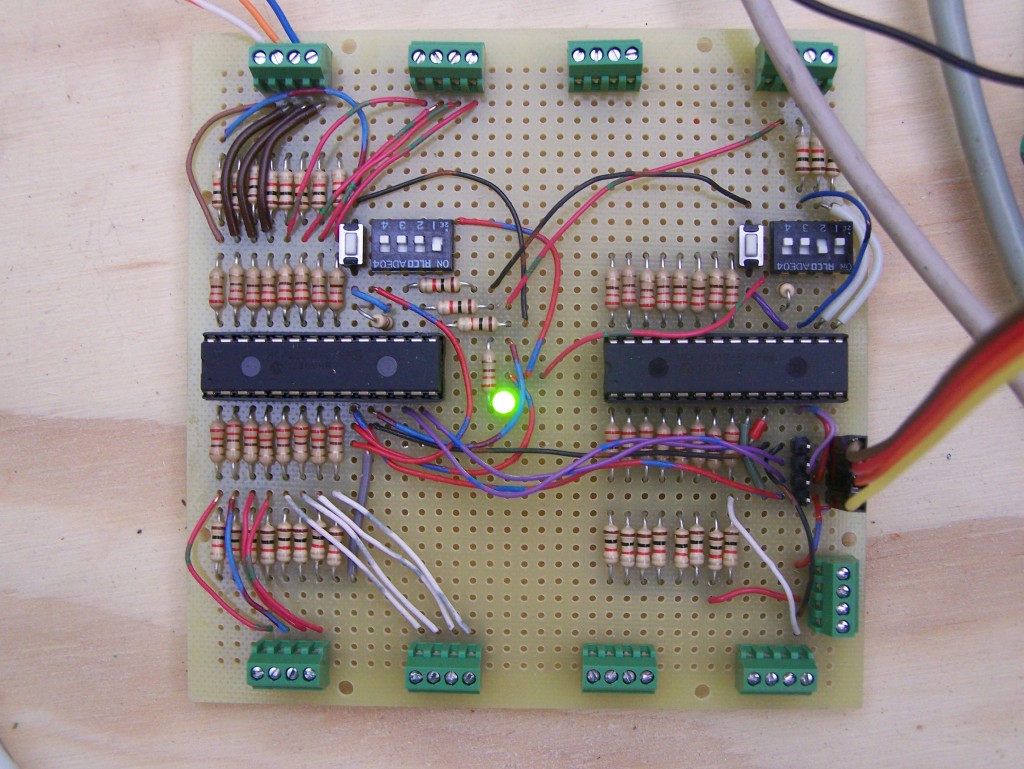 A close up of the board. Two MCP23017’s. Each chip has 16 inputs. I installed pull-down and buffer resistors on each input.

Each chip can be set to a specific I2C address using the dip switches. Anything from 0x20 to 0x27.

With two chips on that board, I have a grand total of 32 Inputs. 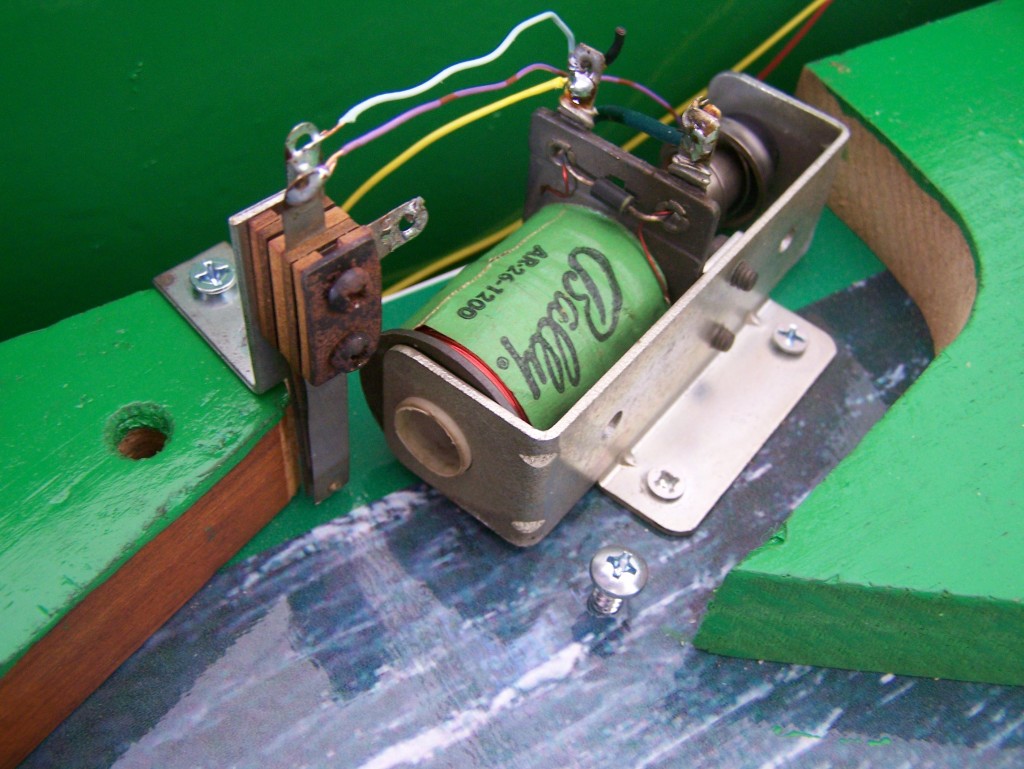 Here’s the ball return assembly. A jerry-rigged thing, but it works like a charm. 🙂

A cabinet kicker assembly is used to shove the ball back up into the shooter lane, and a trimmed down leaf switch makes a good sensor. 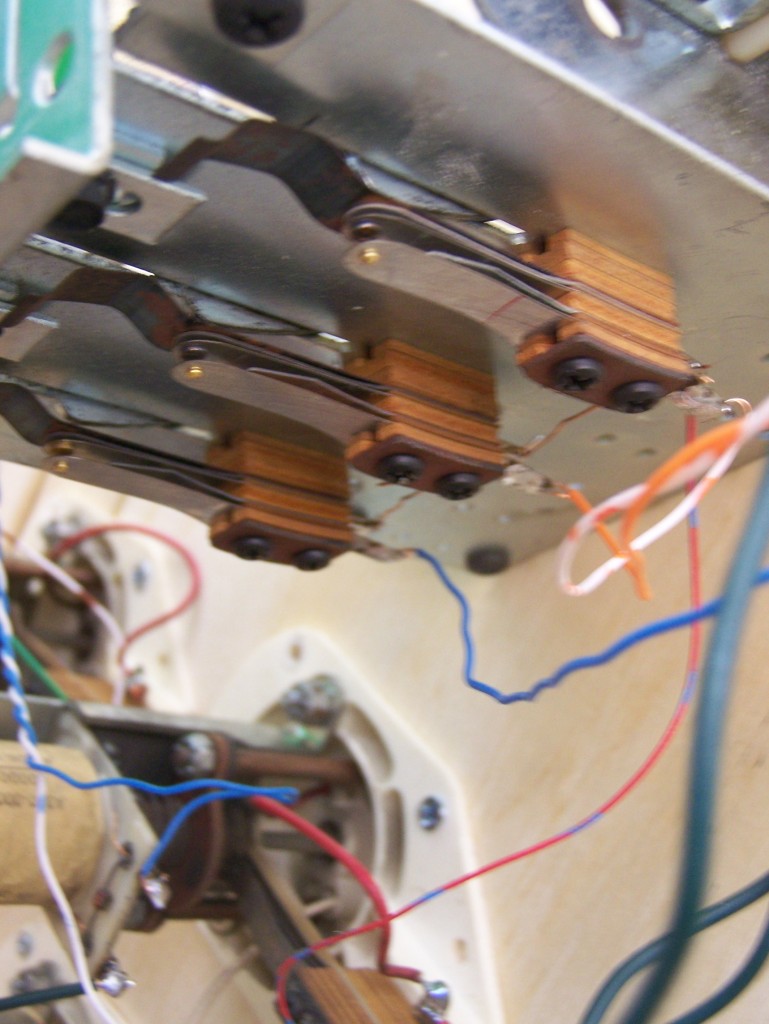 It’s a bit blurry, but you can see the leaf switches for each drop target wired up.

Some people would say USE A SWITCH MATRIX!!! But in all honesty, that seemed like more trouble than it was worth to me.

My dad’s got a bunch of twisted pair snakes laying in our basement that I’ve been using. It’s worked pretty well so far… 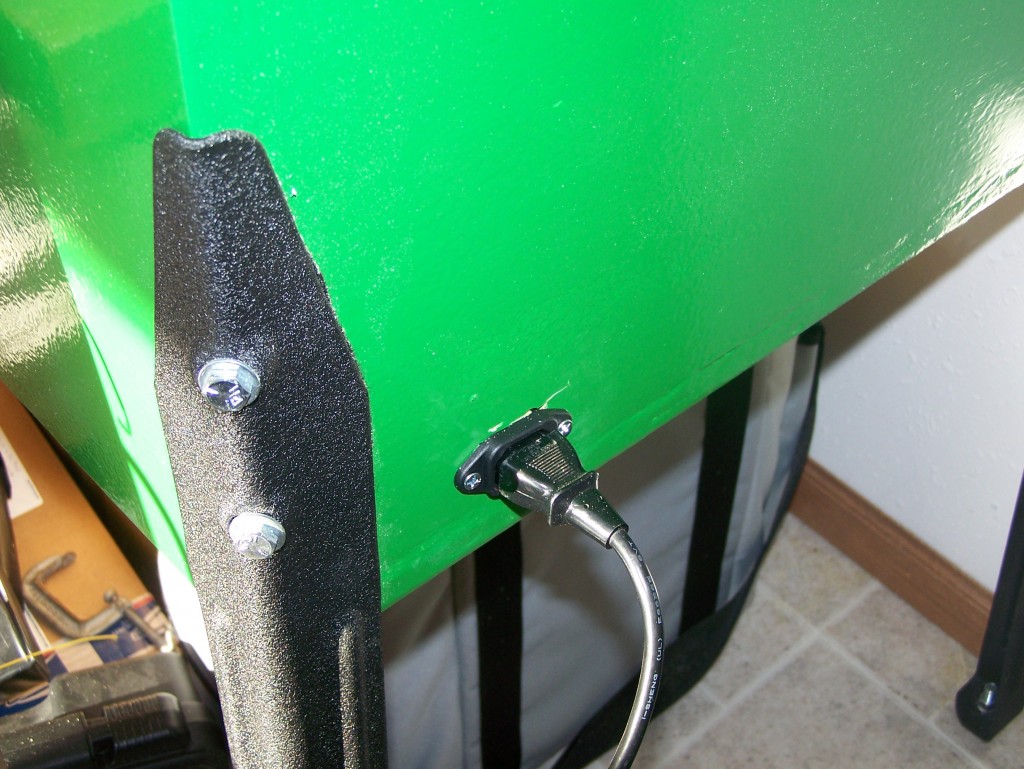 There’s an AC plug installed. So, my pinball machine can use a regular AC cord! 😀 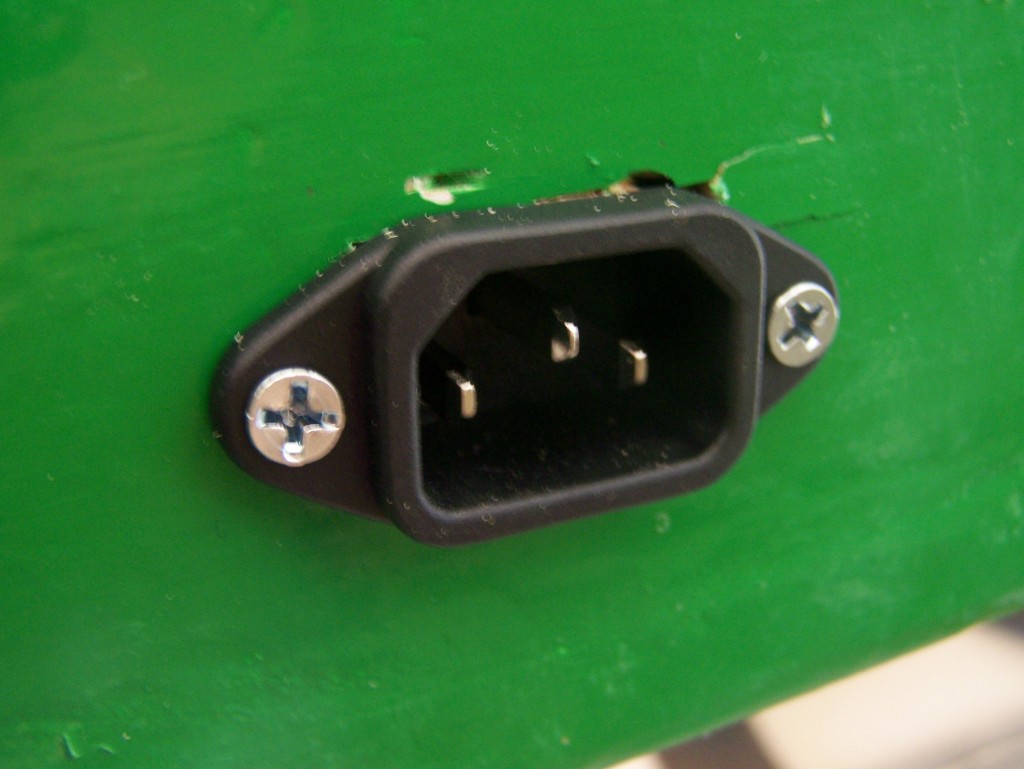 I’ll probably be able to fix that somehow. 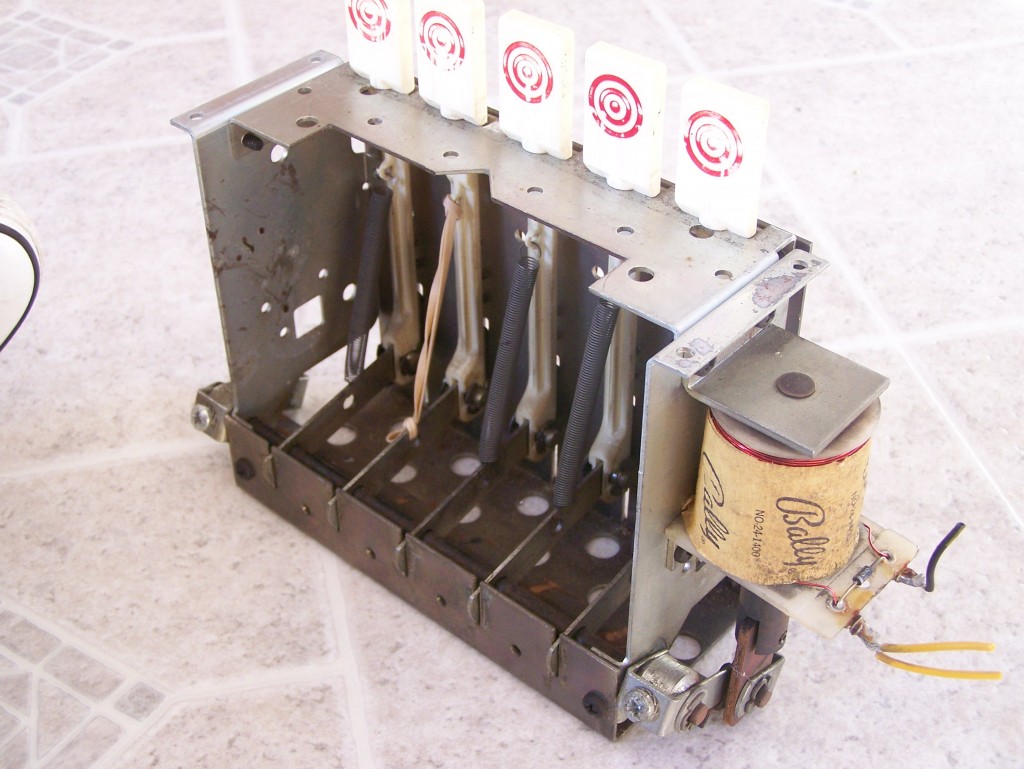 I got a box of pinball junk on eBay for about $20. This drop target assembly came with it, but was pretty beat up.

Here it is rebuilt. Works like a charm now. 🙂 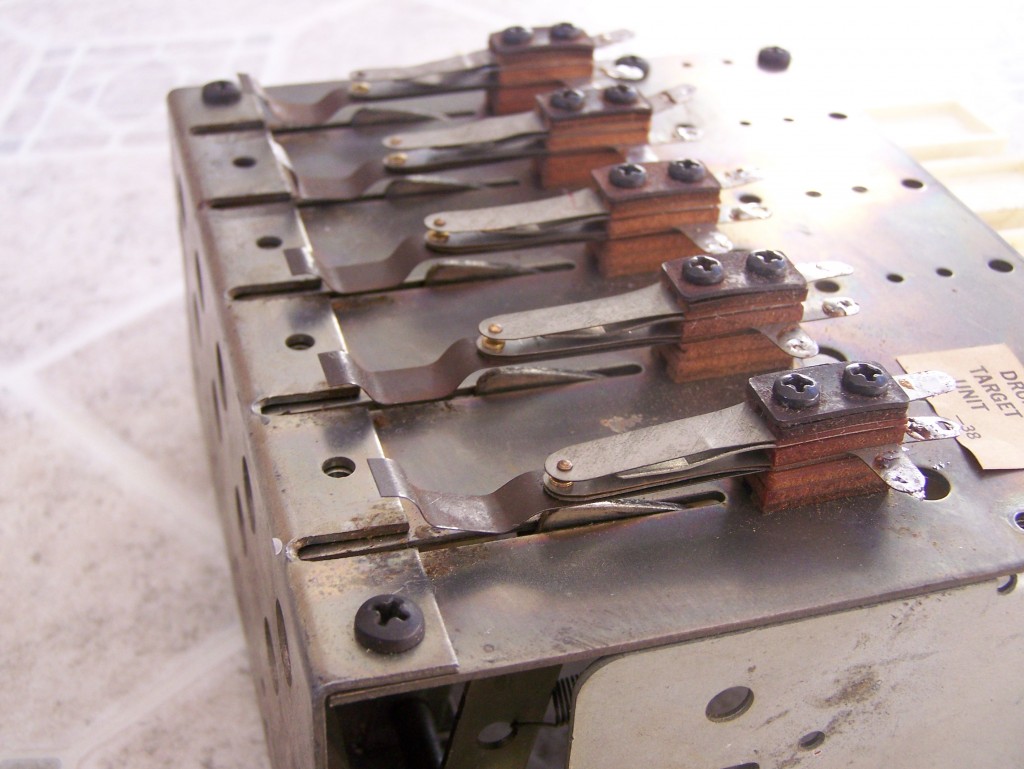 All the leaf switches had been mashed, and because of that, the targets wouldn’t drop.

So I disassembled each one, and straightened out the metal. 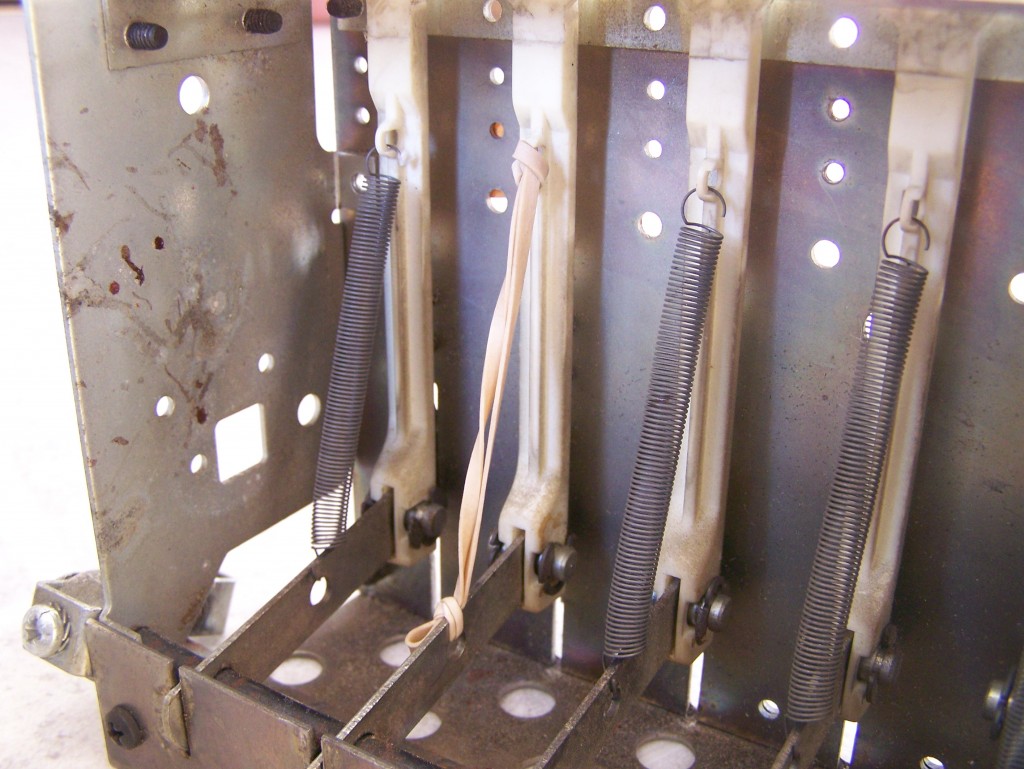 One of the Drop Targets was missing a spring. I managed to replace it with a rubber band. 😀 It works pretty well, and eventually I’ll buy a real spring. Or at least I like to think I will. 😛 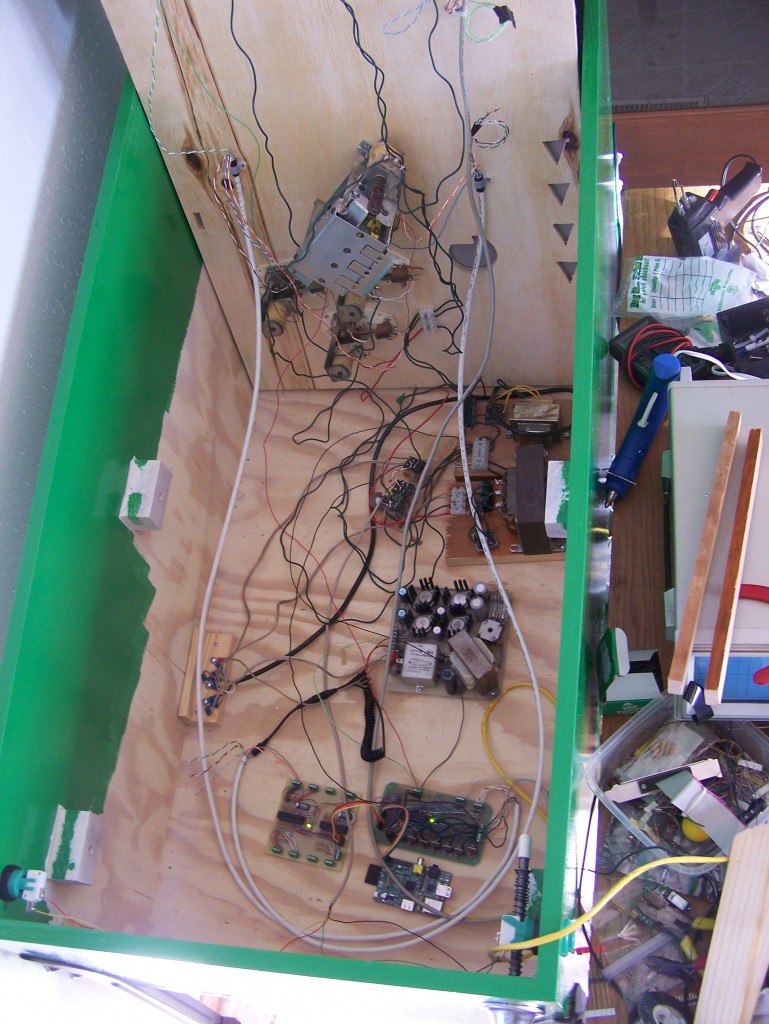 Here’s the cabinet so far. LOTS OF WIRES! 😀 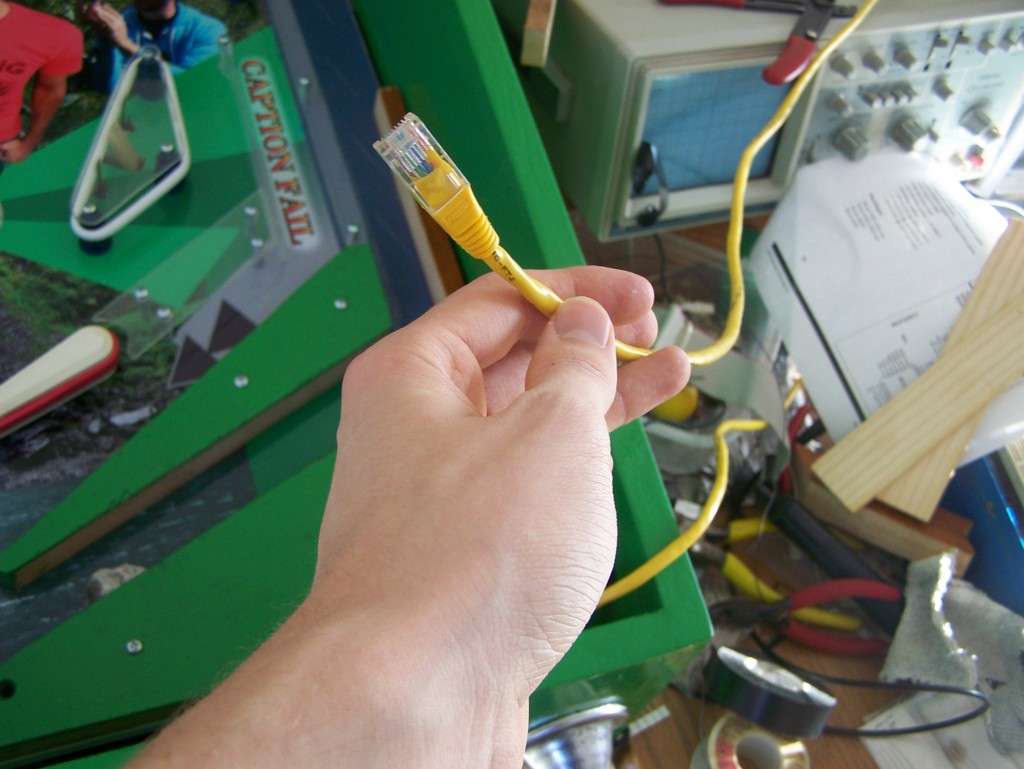 I think I may have the world’s only Ethernet enabled pinball machine. 😀

But seriously though, it’s the easiest way to diagnose problems on the Raspberry Pi.

I’ll install a jack eventually, but for now, I like to think of it as my pinball machine’s umbilical cord. 🙂 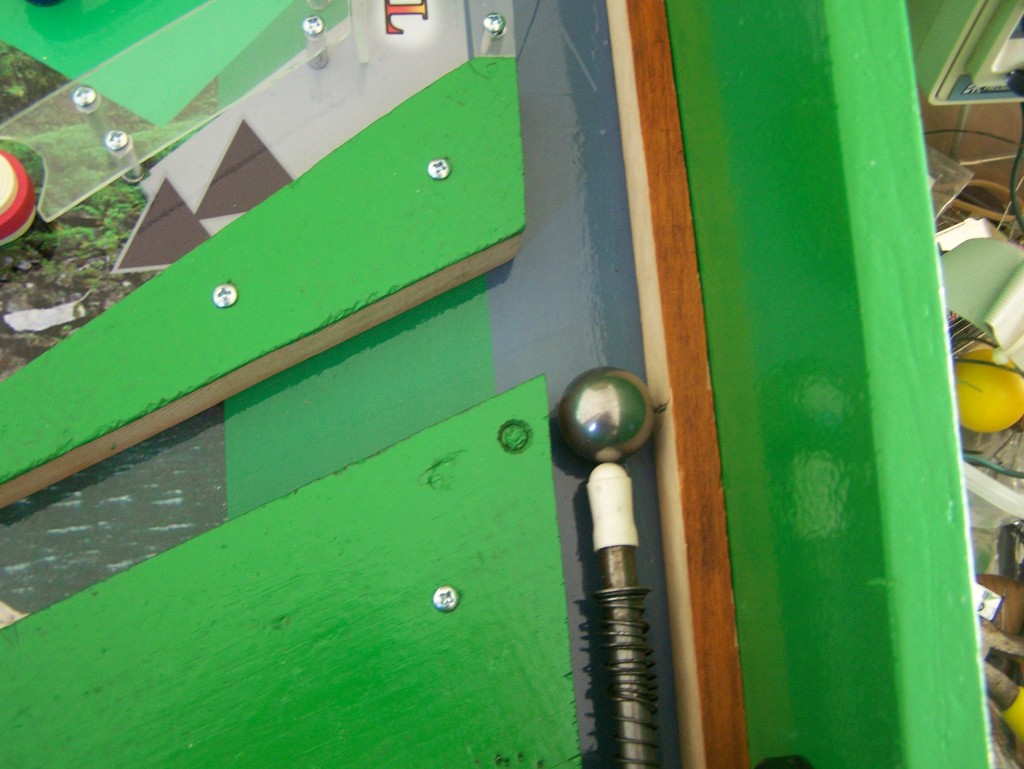 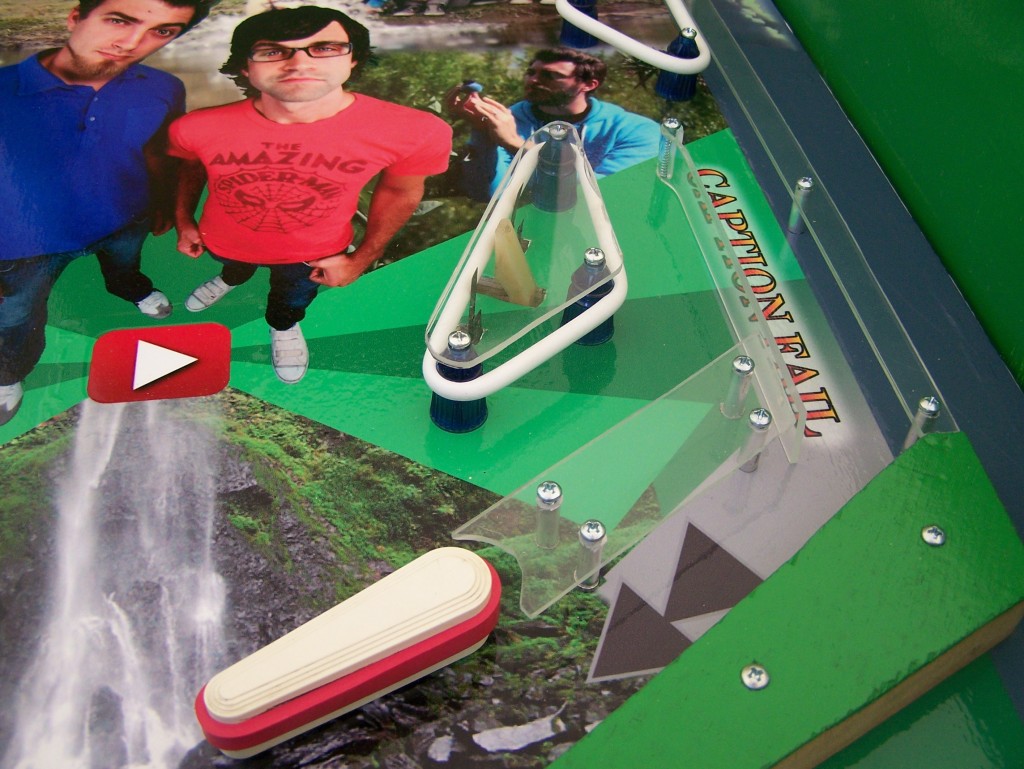 Most of my rails and stuff are made out of 3mm acrylic plexi glass, held up by custom cut aluminum spacers. It works pretty well, and so far seems sturdy. 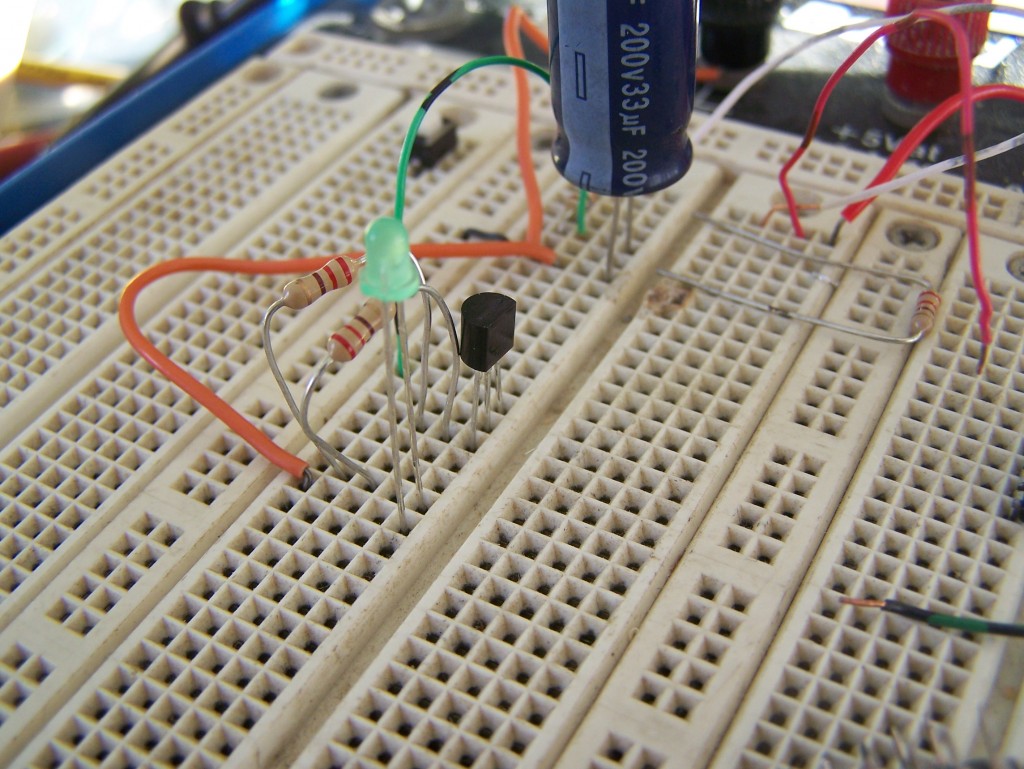 Which means… that in a few weeks, we should get lights!! =D =D

4 thoughts on “A Pinball Update”