Skip to content
Build a pinball machine. It indeed sounds crazy, and perhaps it is. But alas, the amazing meld of electronics, mechanics, wood working, and graphic design lure me with every thought. You are probably wondering Why build a pinball machine? And the answer(s) comes in two parts, both driven by geek logic: One, because it’s cool, and two, why not?

A bit of history is owed to you the reader. Back in 2008, I had the notion of building a pinball machine, but being only 15 at the time, I just didn’t get a lot of the concepts, and I was also in a position of quite limited fiscal resources. Thus, for about four years, a wooden contraption sat in the corner of our garage, collecting dust and cat hair. It was originally going to be constructed completely from scratch with self-wound solenoids, hardware store mechanics, and a plain wood design.

But a lot has changed since then. I’ve secured a somewhat steady income, (thus I have money) and I have had some significant brain development. (I think.)

So, in recent history I have actually been planning, building, and designing a real pinball machine. I began by pulling that skeleton of a pinball machine out of the corner of our garage, and removing all it’s unusable components. Like the flippers I cut out on a band saw, and the bearing systems that were made only out of wood and carriage bolts.

I then began the re-construction of a prototype play-field on a preliminary stand. I built a 30v DC power-supply out of a simple transformer, bridge-rectifier, and some electrolytic capacitors that were too small. I was then motivated to make my first purchase. I bought a right and left flipper mechanism from a guy in Greece. From what I understand he parted out an old Gottlieb Pink Panther machine. I waited about two weeks for those to arrive, and when they did, I spent that morning installing them in my play-field, the next evening, I had them flipping a wood ball around. (I didn’t have a steel 1 1/16″ ball yet.)

It’s from several weeks ago, but that progress can be seen in the video. Remember that this is a very preliminary prototype of the play-field. It doesn’t even look like this any more.

Real planning was something that I really wanted to do from the beginning of this project’s re-boot. I knew that if I planned, it could be done right the first time. (Hopefully.)

So my plans thus far are as follows: 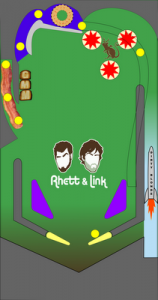 Theme! Yes, I need to make sure the theme is awesome. Because that’s what good pinball machines are all about. Benjamin Heckindorn’s (Ben Heck) first build was adventurously themed Bill Paxton (the star in Titanic) and while he has done many more themes including LOST, I always admired the wild step he took with Paxton. I knew mine had to be just as epic. I got a number of suggestions, including Star Trek (which had already been done) Flo (from the Progressive commercials), a pinball themed pinball machine in a sort of Yo, Dawg fashion, but the idea that struck me most was… Rhett&Link.
Yes, my theme is going to be Rhett&Link.
While I intend to document this project’s progress along the way, here’s a sample of a (once again) very preliminary play-field layout and design.
So, be sure and subscribe to my RSS feed so that you can receive updates, and don’t forget to tell your friends!