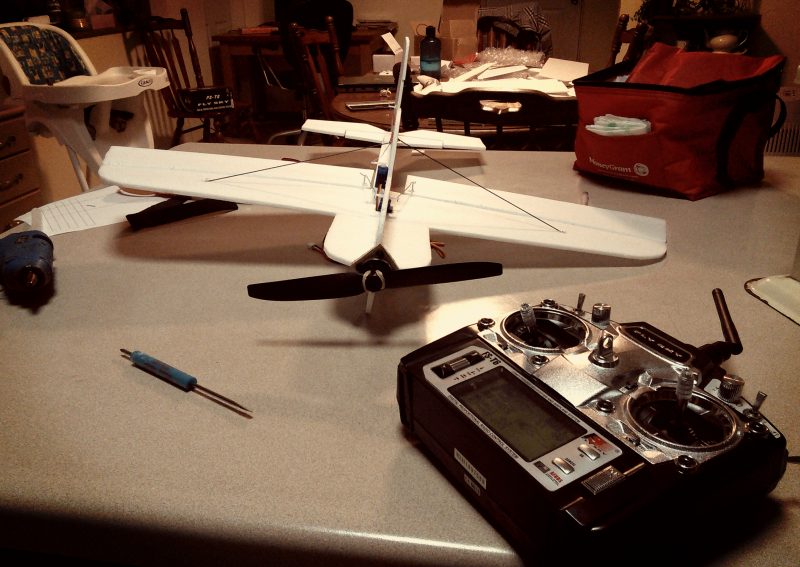 As the winter months began to roll in, I decided to attempt to build an airplane small enough, and maneuverable enough to fly inside my school’s gym. I found some foamie plans online, and picked out the lightest electronics I could find (at a reasonable cost).

An expert may have been able to tell me that a plane that would lift all that would be pretty tight in a single basketball sized gym. But I didn’t know that yet.

I began cutting out the foam board and it was exciting to watch it take shape. 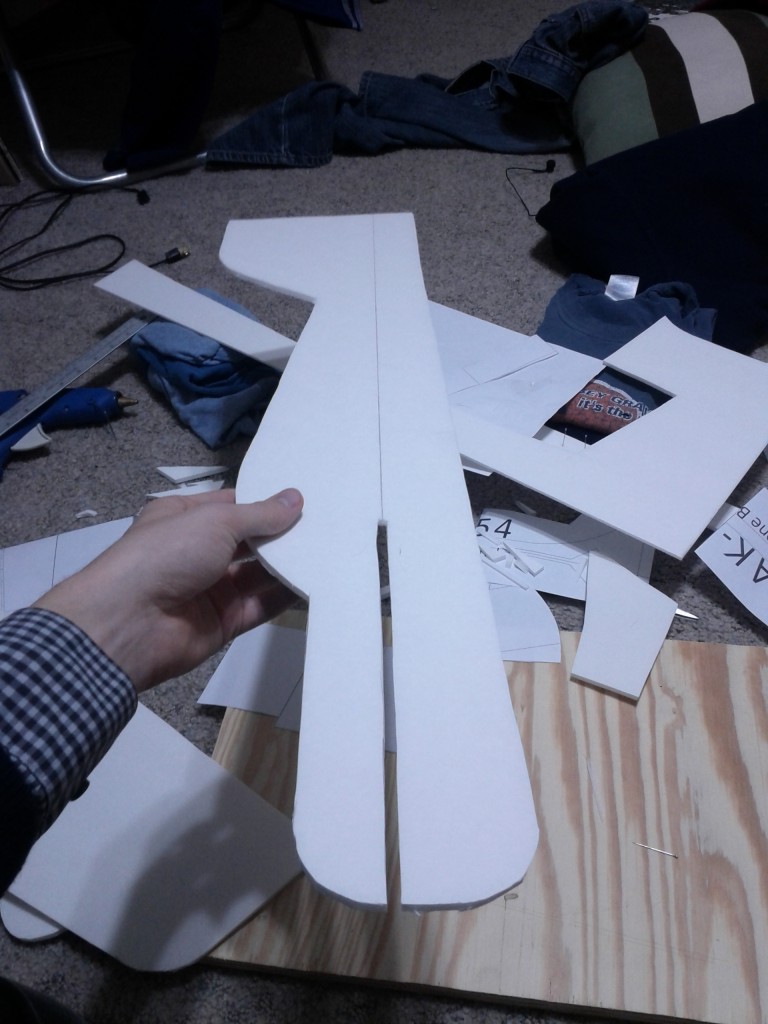 And then the pieces began coming together. 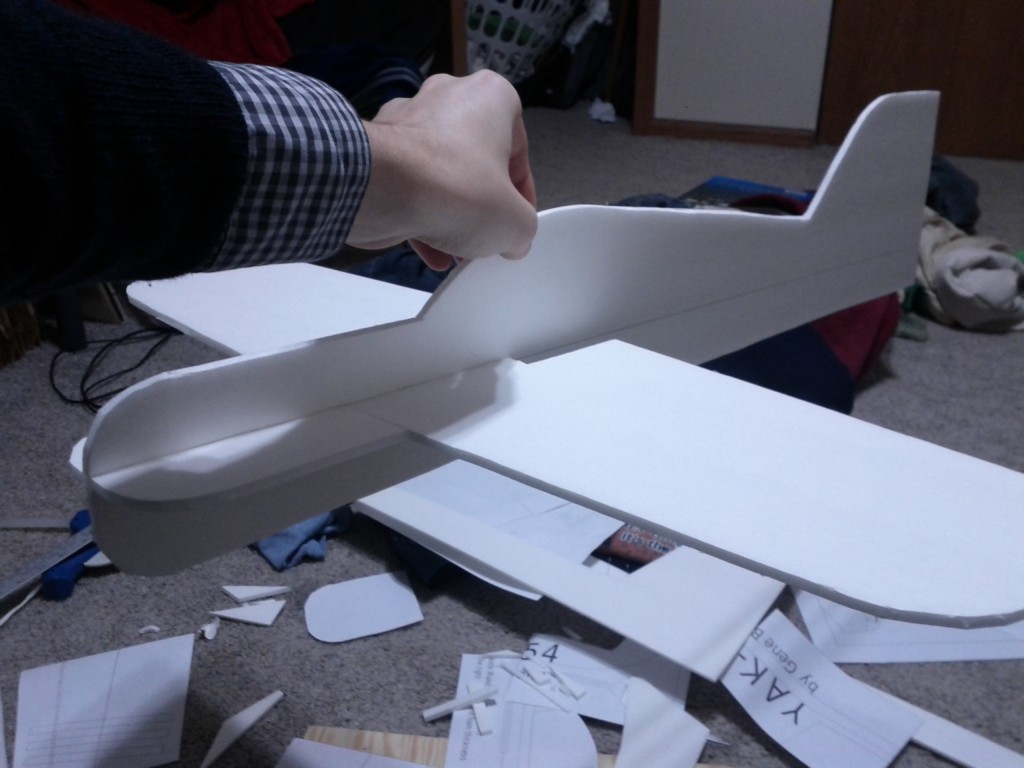 After doing a bit of research and reading on forums and such, I decided that the paper may be adding a LOT of weight to the foam board. See this blog post about my discoveries.

So I decided to strip the paper, and use carbon fiber to reinforce where necessary.

And then there was nothing in my way but a night of building. 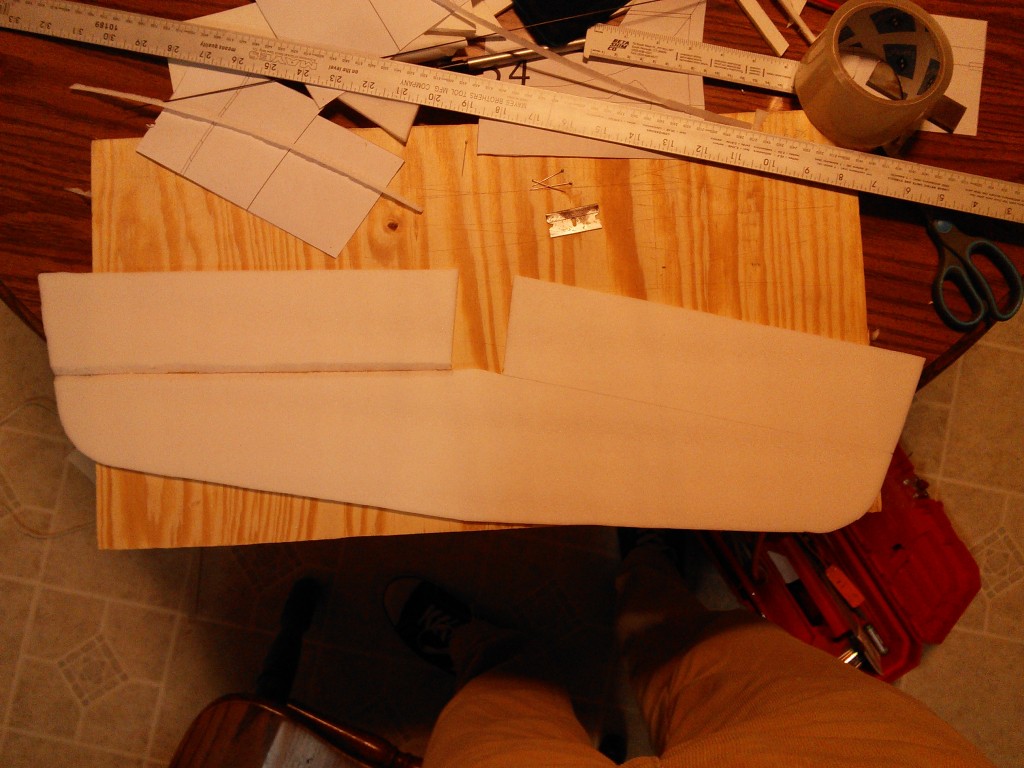 And here is the tail beginning to take shape. 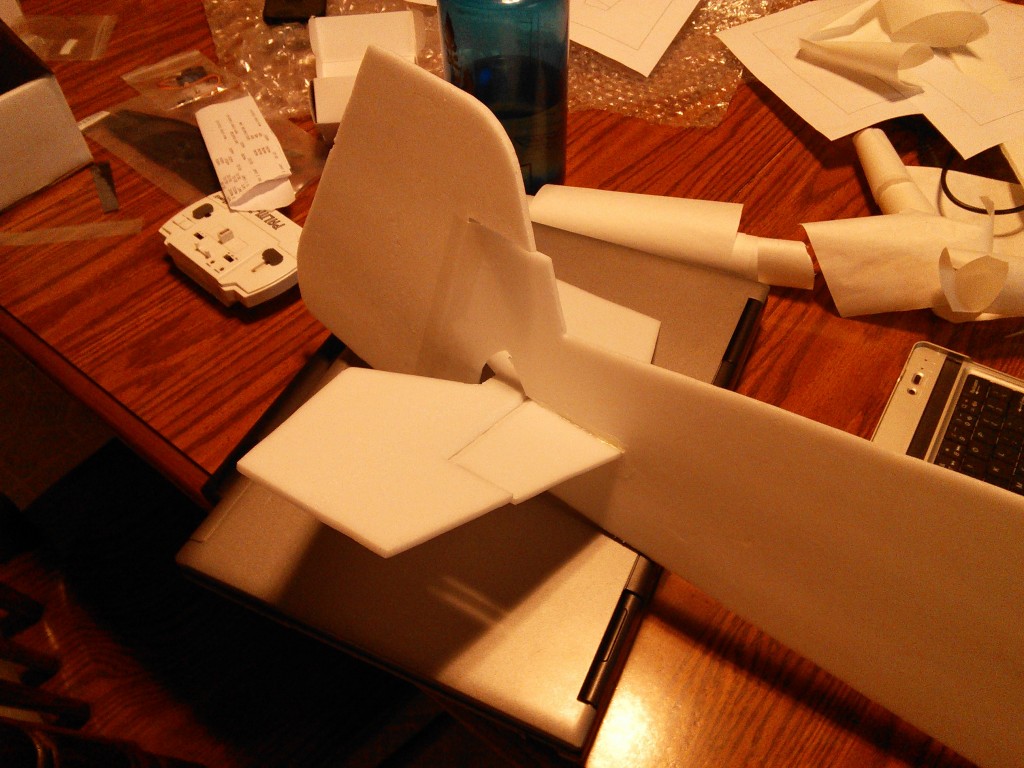 The servos were mounted, and carbon fiber struts were installed. I used 1mm CF rod for this. It has a lot of pulling strength, but tends to bend when pushed. I eventually added struts to both the top and bottom of the wings. 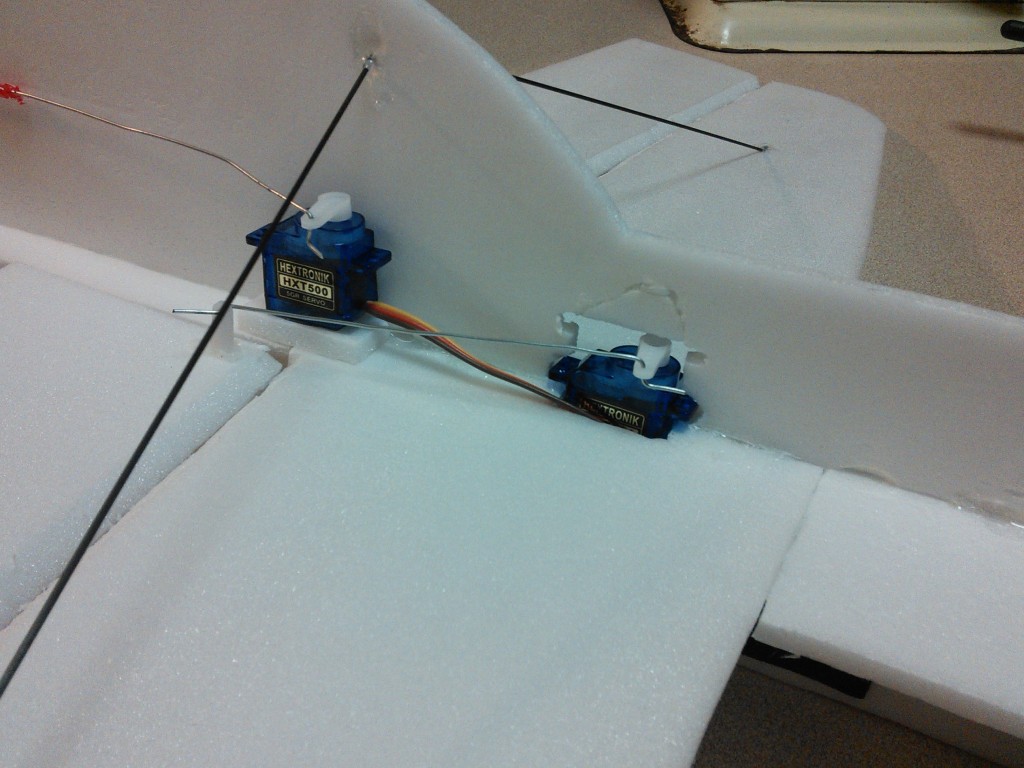 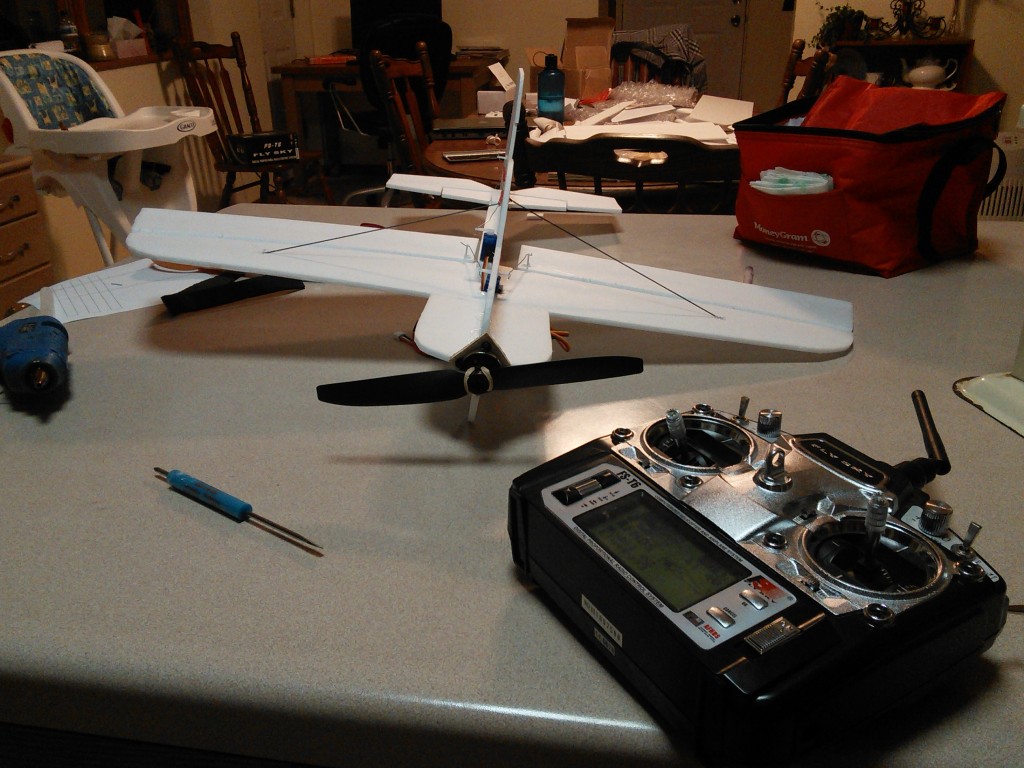 Here it is all finished! 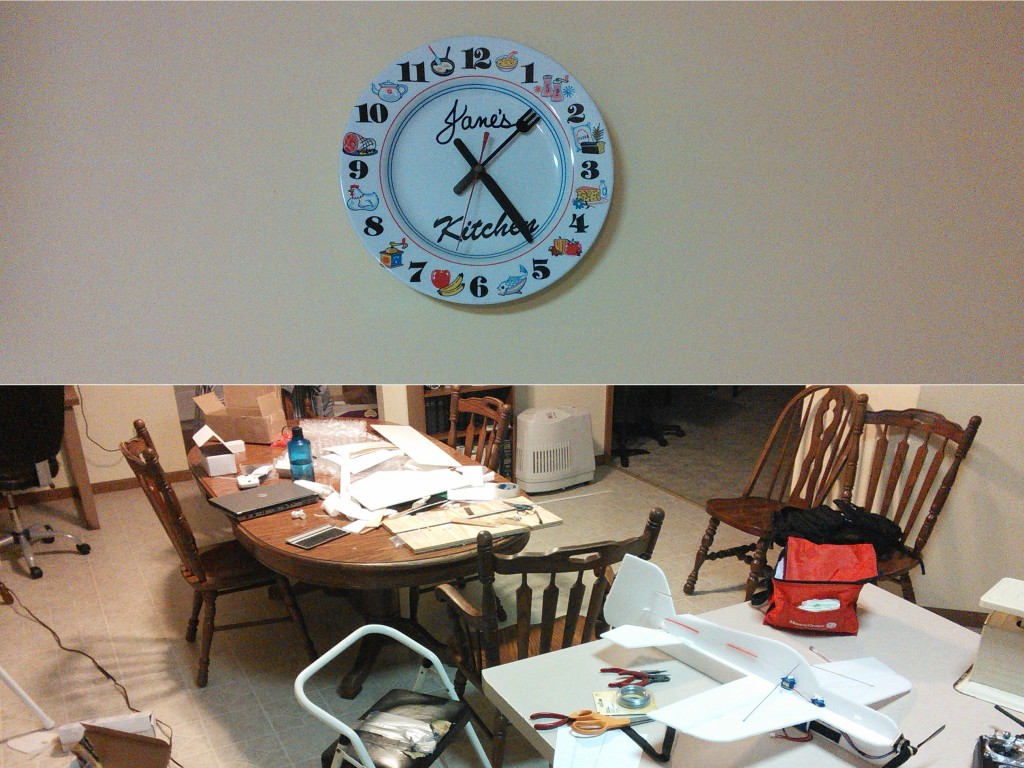 The aftermath in the kitchen area was quite profound at 1:24am. It was sort of a beautiful mess though…

The next morning I used some large point Sharpies to color it and give it a bit of a paint scheme. 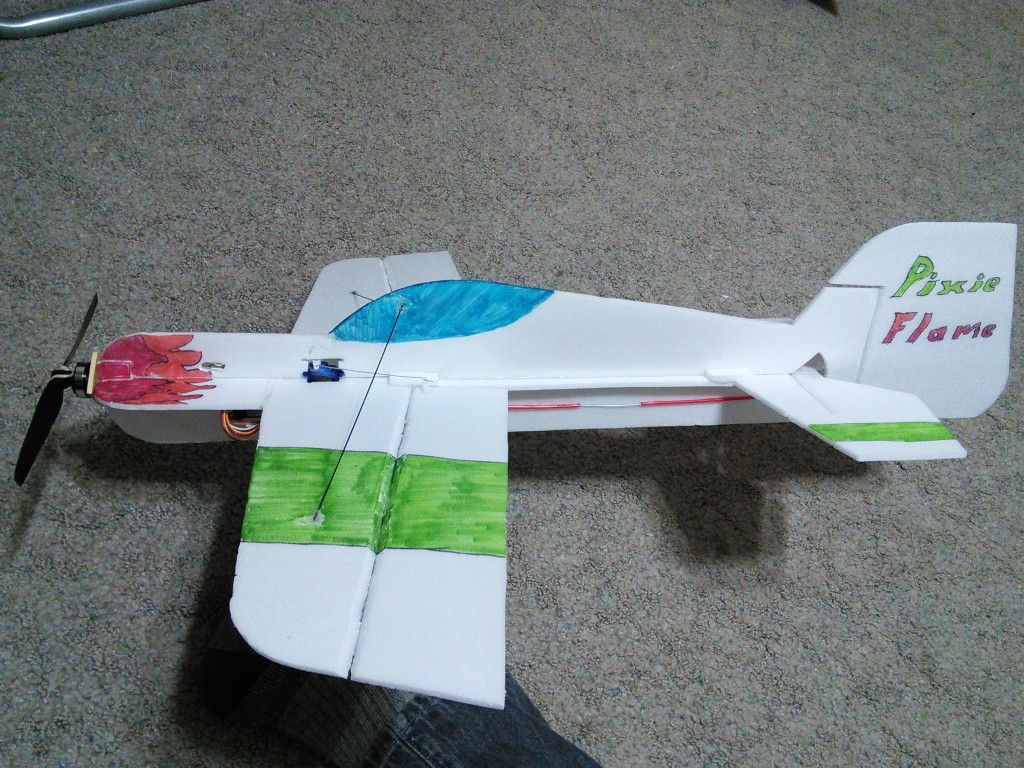 Admittedly, I’m a more apt engineer than artist. But Pixie Flame and I were both moderately happy with it. 🙂 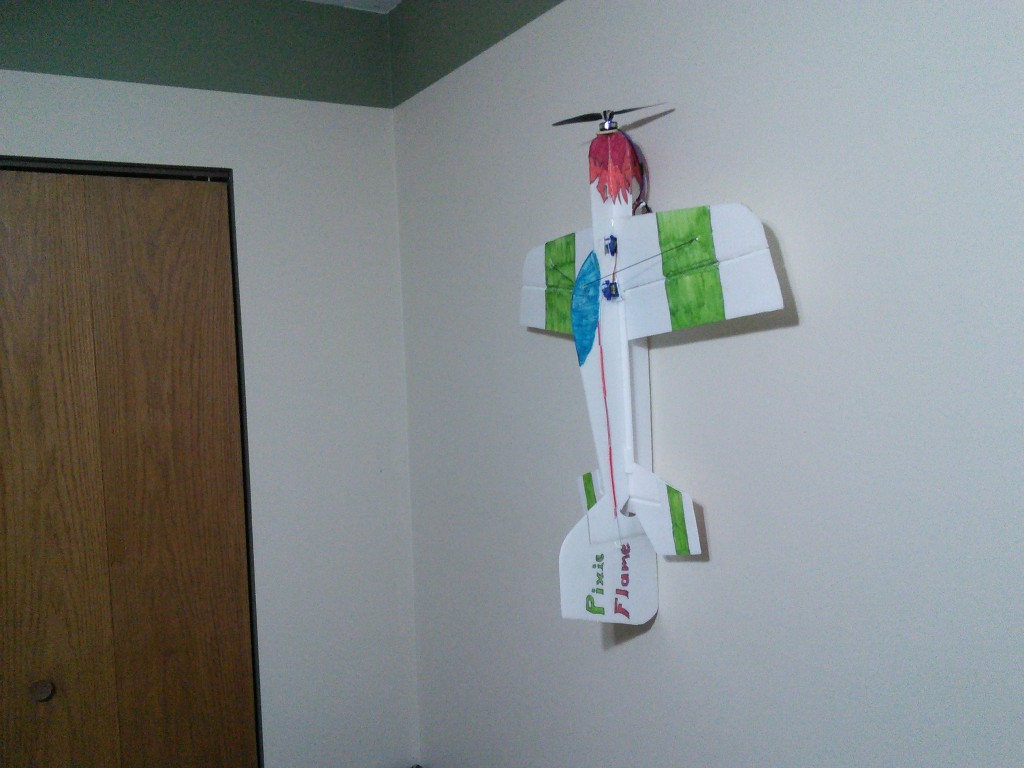 And she hangs nicely on the wall!

Now for a bit more story. This build was several months ago. There were several major things that came about after my original design which I would totally do from the start if I were to build her again.

Since I built this plane, it’s taken quite a  beating. Mostly from me trying to do 3D stuff that I’m not very good at. 😀 But the durability of this plane has amazed me. It’s taken a LOT.

Also, this plane did fly inside a single basketball sized gym, but it was REALLY tight, and I was lucky to sustain a flight without a crash. If I had a double-wide gym sometime, it would probably fit a lot better. Or, if I was a good 3D pilot, then it would also be fun, but I’m not yet. 😀

But before I scrapped the plane for a rebuild, I took a video of me flying it in the snow.

Here it is. And thanks for reading. 🙂

Sorry about the autofocus. Evidently my Nexus 7 just wasn’t sure what was important.